Hapres| Home| Information & Guidelines | Editorial Board | About Us

Direct Evidence for TP53 Involvement of TP53 in Proliferation, Migration, and Invasion of Gastric Carcinoma Cells

Gastric cancer is one of the most common digestive tract malignant tumors of the digestive tract and it ranks second, in terms of mortality, of all cancers [1-3]. Technological advances in medical imaging technologies and therapeutic advances in chemoradiotherapy, biological target therapy, and cellular immunotherapy have improved gastric carcinoma prognosis. However, it remains poor, which reflects the currently poor understanding of its pathogenic mechanisms [4, 5].

Gastric cancer is a multifactorial disease. Oncogene overexpression and tumor suppressor genes lack of expression are the primary molecular mechanisms involved in tumor growth, therapeutic resistance, and gastric cancer metastasis. Some genes, such as HER-2, VEGFR-2, EGFR, VEGF-A, mTOR, and c-MET/HGF, overexpress has been widely reported in gastric cancer patients and a targeted inhibition of these genes is currently being used as treatment options for gastric cancer [6]. Tumor suppressor genes, such as CDKN2A/p16, CDH1/E-cadherin, RUNX3, and MLH1, are often reported to be inactivated by promoter methylation, mutations, or chromosomal losses [7]. Genomic aberrations in TP53, PIK3CA, ErbB2, ErbB3, ARID1A and KRAS gene are frequently encountered in gastric cancer [8].

This study investigated the roles of p53 in the proliferation, invasion, and migration of gastric cancer cells by silencing, and overexpressing, p53 expression in gastric carcinoma BGC-823 cells.

The TP53 siRNA sequence was designed using a publically available online software (www.qiagen.com/siRNA). Complementary siRNA sequences were synthesized and made ready for use by Invitrogen. The TP53 gene was cloned into the pEGFP-N1 vector. cDNA from the TP53 gene was amplified using the forward primer: 5’-CTCGAG GAACAGCTTTGAGGTG-3’ with Xho I sequence in italics and reverse primer: 5'-GGATCC GTCTCTCCCAGGACAGGCACAAAC-3’ with the BamHI sequence in italics. PCR amplification was performed at 94°C, 3min. This was followed by 30 cycles at 94°C, 35s; 58.7°C, 35s; and, 68°C, 1.5 min. Amplified DNA fragments were purified from agarose gel, digested with XhoI and BamH I, ligated into pEGFP-N1 vector (digested with XhoI/BamHI), and transformed into DH5α competent cells. Clones were selected and verified by sequencing. The vector produced was designated as “pEGFP-TP53”.

BGC-823 cells were cultured in an RPMI 1640 medium containing 10 % fetal bovine serum. The cells were transformed with siRNA or pEGFP-TP53 plasmid using a lipidosome cell transfection kit and following the instructions contained in the user mannual.

Cells were harvested and centrifuged. Cell pellets were used for RNA isolation with TRizol reagent by following the instructions contained in the manufacturer’s manual. 1 ug of RNA was used for cDNA reverse transcription using a cDNA synthesis kit. Synthesized cDNA was kept at -20°C.

Total protein was extracted from cultured cells using a protein extraction kit and following the instructions in the manufacturer's manual. Protein concentration was determined by a BCA protein assay. Protein aliquots were kept at -80°C. Western blot was performed as described above [13]. Forty µg of protein was loaded for each lane and separated on 10 % SDS-PAGE gels. After transferring and blocking, the membranes were incubated with either anti-p53, or β-actin, antibody overnight at 4°C. This was followed by a secondary antibody for 1 hr at room temperature. Bands were visualized using ECl reagents and scanned for density analysis. β-actin expression was used as an internal control for sample loading.

Invasion assay was conducted in a 24-well Transwell chamber with matrigel-coated membranes. Two hundred ul of (1 × 105 cells/ml) cell suspensions in a serum free medium were spread onto the wells in the upper chamber and 1000 ul of complete cell medium containing 10 % FBS were applied to the wells in the lower chamber. Incubation for 12, 24, and 36 hrs at 37°C, 5 % CO2 followed. Membranes in the lower chamber were removed and stained with 0.1 % crystal violet dye for 15 min. The cells were counted under a Fluorescence Inversion Microscope.

Cell migration was analyzed using a wound healing assay. Seeded into 6-well plates were 5 × 105 cells. After transfection, cells were cultured for 24h and then a scratch line was made using pipette tips. After rinsing three times with 1 × PBS, cells were continuously cultured in a serum-free medium for 24 hrs. After photographing, scratch width in the photographs was analyzed using Image J software. 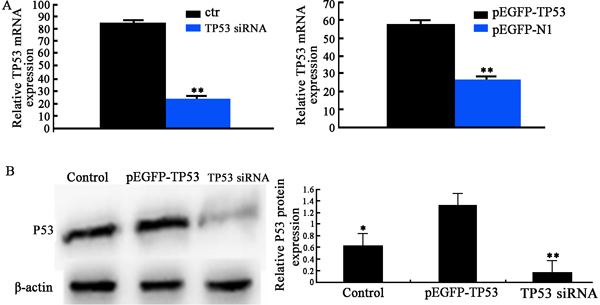 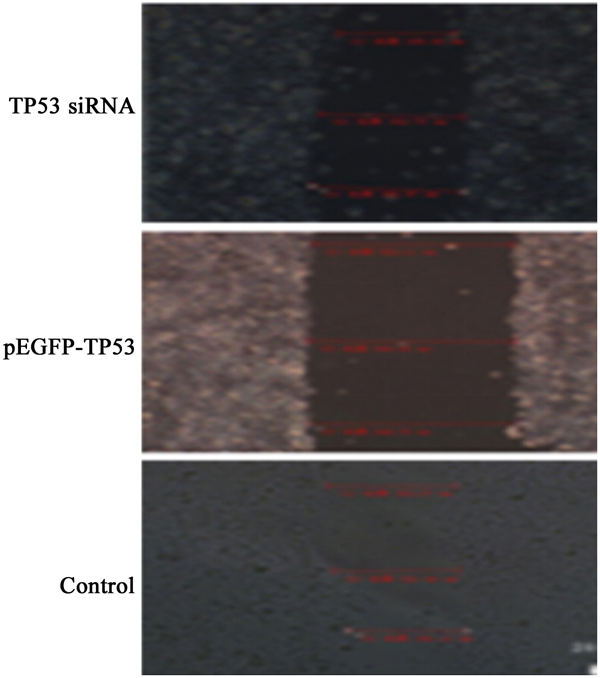 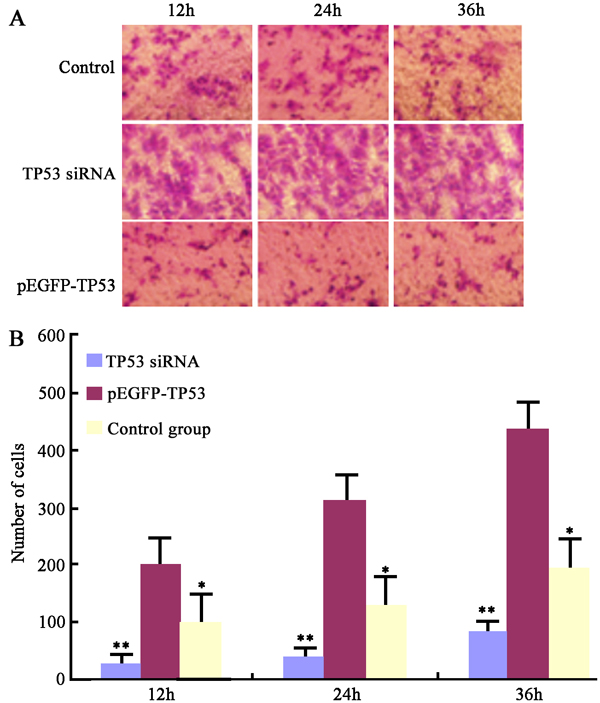 Despite an increasing comprehension of molecular mechanisms and the consequent development of targeting therapy for gastric cancers, the prognosis remains poor, particularly in advanced disease patients. TP53 gene mutations have been reported as present in as many as 77 % of metastatic tumor patients [11]. These mutations impair p53 tumor suppressor effects, such as inhibiting proliferation, migration, and invasion of gastric cancer cells [12]. There is no direct evidence as to whether restoring TP53 gene function could inhibit gastric tumor growth and metastasis. This study detected that silencing of TP53 gene expression significantly increases cell proliferation, invasion, and migration in gastric carcinoma cells, while p53 overexpression significantly inhibits cell proliferation, invasion, and migration.

The authors declare that they have no conflict of interests.

How to Cite This Article